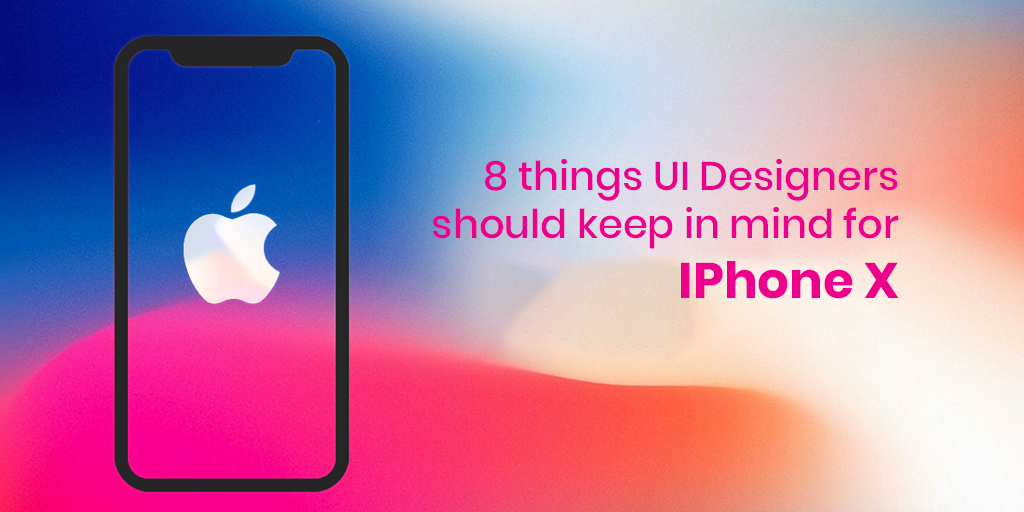 8 things UI designers should keep in mind for iPhone X

In a quest to stand out, UI designers have been facing new challenges in terms of giving out simple yet best interfaces. Apple tops the list, in adapting new ways to create new UIs knowing change could cause inconvenience to the users. But nevertheless, it never faces anything other than excitement from users, who are ready for all the innovations Apple offers.

UI designers of Apple Inc have come up with the new interface which has taken the internet on storm. Below we are listing some new features in iPhone X which had already become successful.

Adjusting the UI for iPhone X:

The foremost, adroit UI/UX feature which challenged the iOS developers is the adjustable screen size. iPhone X with its 20 percent taller screen, has lead the designers to make it adaptable for applications built on previous native models.
It is to be observed that making the new interface exciting yet easy has been kept in mind by the developers.

What is a border? iPhone X has extended its boundaries literally, with an advent to scroll till edges,
users would now be able to utilise the whole screen. Apple’s User Interface has been directed to be more user friendly yet stylish, breaking all the norms followed till date.

Status bar, which provides the information about battery, network access, etc, has been increased in size in iPhone X. It is believed that status bar is of foremost importance in a phone as it gives the credibility to accommodate the device information at the sight of an eye.
Yes, it is hidden when opening a gallery or video games which requires a full screen. Otherwise, it is visible in performing every other task.

Considering the amount of accidental operations taking place on phones, the need for safe areas has increased. Safe areas do not let the user place any important clickable elements, on the screen.
Apple in iPhone X has come up with Safe Area guides which shows designers the place of content.

Dealing with Gestures in iPhone X

Since there is no physical button, the use of gestures is being implemented in iPhone X.
But with every new beginning comes setbacks. In this, the users are finding it a bit difficult adjusting to change, unable to welcome the custom gestures. Also, as home indicator has replaced a home button, it is recommended to avoid hiding it.

Landscape mode lets you gain maximum space for all the functions, letting you get rid of the status bar. The navigation bar and tab bar sizes reduce considerably giving the best on screen experience.
Although the web developers should bear in mind, the development of adjustable websites, according to the screens, iphone developers have created safe area which lets users browse through websites without any hassle.

Bottom of the Screen:

The bottom of the screen, has majority of app controls usually, but iPhone X has driven its way along a different path, by not providing any hardware button on the bottom of the screen.
It is true, that to get acquainted with the new interface would take a bit time, but nothing comes easy. The hardware-less bottom has set a good wave of excitement among users, despite its unusual
interface.
To cover, users are provided with the advantage of using floating elements, making iPhone X the new rage.

What comes new? Introducing the notch. iPhone developers against the scepticism has been successful in including the notch in iPhone X. Apple has exclusively instructed designers to not hide the notch for making all the difference. In the quest to stand out, Apple has always come up with “top notch” solutions, as in described in this new feature.

Apart from style, notch serves better in functionality as well, as opined by various X users.

Technology
Web Design and Development
Have an Innovative app Idea
Get a Free Quote to Build & Manage your App..!
submit
Popular Posts
follow us
Related Blogs

Published May 10,2018 by Jamie Campbell
8 things UI designers should keep in mind for iPhone X
WE ARE REVIEWED