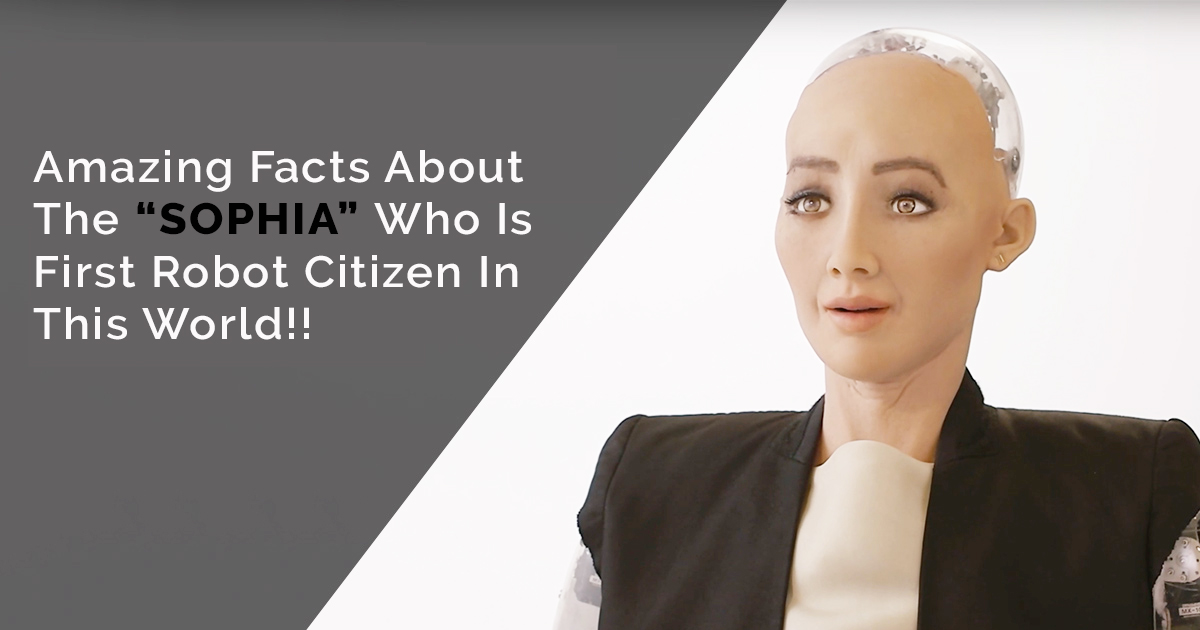 Sophia: The First Robot Citizen in the world & Amazing Facts About Her

Of course, to generate headlines, Sophia’s announcement was actually a calculated publicity stunt. For keeping Saudi Arabia forefront in the minds of software developers when you think about innovation, especially its commitment to a post-oil era.

Sophia‘s proclaimed for multiple human related questions likewise what is the meaning of citizen and what are the rights assigned to her. Some personalization is being expected about the rights of robots with the help of EU committee in the month of January. The robot Sophia is really a great representation of artificial intelligence that looks amazing.

It was observed that these robots look like human beings or fake humans but still look very appealing to people. These robots must accomplish some level of aesthetic refinement along with integrated social responsively.

The artificial intelligent robots Sophia lead by Artificial Intelligent developer named as David Hanson. He added these views in any section of the software development company. The news advertised in the routine paper is that how come humanoid robots can be friendly and supportive, regardless of the conception that anything to ‘fake human’ will trigger a revolution among people

To have detailed information about her, feel free to visit Sophiabot.com anytime. Most of your queries will be answered there only.

She has abilities to express her feelings and can also demonstrating diverse expressions. She relates her emotions to actions. She has strong desire to live and work with human beings so that she can express herself and can understand and trust human beings. It is not less than a miracle that a robot with a big name Sophia awarded with the gift of citizenship.

During a business event in Riyadh on the way and as per the official Saudi press release, the robot named Sophia was confirmed as a Saudi citizen. Sophia proudly shared her thoughts in the panel that she has been very honored and proud for this valuable unique distinction. This has never occurred in the history before even by any of the mobile programmers.

As per Hanson Robotics, Sophia embodies Hepburn’s classic beauty: a slender nose, porcelain skin, high cheekbones, deeply expressive eyes and an intriguing smile that actually changes color with the shade of light. They explain her as having ‘simple elegance,’ and hoping that this kind of approach will indeed go some way to her acceptance in the public sphere. She was purposely designed to resemble like Audrey Hepburn. David Hanson who is her creator wants to be a Disney Imaginer via software development services.

Sophia wants to protect humanity and intends to live a better life likewise latest designs leads to smart homes and bright future of the cities.

Sophia’s Artificial intelligence is revolving around specific human values like compassion, kindness and wisdom. Her grace and honesty towards her work allow her to put a quick rebuttal in case there is any concern regarding her potential for abuse. She has always been proven as a valuable resource and always been nice to one and all

As of now, there is only one Sophia in existence and acted more than software programmers. Chances are very less that her copy can be found anywhere else too. In order to have one more Sophia, apply the merged robotic rights concepts or Artificial intelligence tips. Undoubtedly, Sophia is recognized very cool talking piece as well as smart robot. Sooner or later, she will be able to act like free thinkers and will be able to change herself.

Published March 09,2020 by Bob Forer
Top ECommerce Trends to Watch in 2020
Have an Innovative app Idea
Get a Free Quote to Build & Manage your App..!
submit